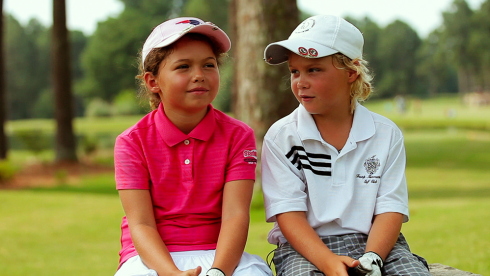 Well here is some fun news!

Mr. and Mrs. Timberlake have signed onto their first project as a married couple, they are now executive producers of the documentary “Short Game.” “Short Game” premiered at SxSW 2013 and won the “Audience Award” at the festival. Find out more information from the official press release:

Distributors Phase 4 Films and Samuel Goldwyn Films have teamed up to acquire North American rights to Josh Greenbaum’s doc “The Short Game,” skedding the film for a theatrical release next month.

The feature, about eight kiddie golfers training for and competing in the annual Championships of Junior Golf, won an audience award at South By Southwest earlier this year. Jessica Biel and Justin Timberlake have signed on as exec producers, joining a list that already includes Timm Oberwelland, John Battsek and David Frankel.

Greenbaum, Rafael Marmor and Christopher Leggett produce the pic from Delirio Films. “Short Game” is the first feature by helmer Greenbaum after amassing a string of TV and short film credits.

The distribution deal was pacted with Phase 4 and Samuel Goldwyn by Josh Braun of Submarine.

Phase 4′s recent titles include Eva Longoria and Billy Bob Thornton starrer “The Baytown Outlaws” and Keanu Reeves topper “Generation Um,” as well as TV properties including “The Vikings” and “The Borgias.” “Short Game” joins a Samuel Goldwyn slate that has included “The Whistleblower,” “Robot and Frank” and “Somm.”

I wonder what press will be done for the documentary and if Jess and JT will be at any premieres / screenings? Stay tuned for more info!