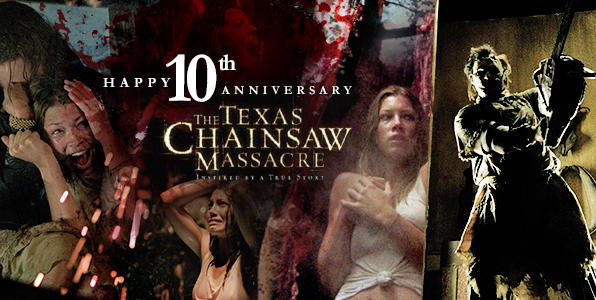 For the very first time in my life.. I feel “old.”

Ten years ago today, October 17th, “The Texas Chainsaw Massacre” was released. While Jess has 25+ films under her belt, there is something about “Erin” that is just iconic.

I still remember seeing the movie for the time, I was 13 and it was “grading day” so there was no school. Four friends and I went to the theater, and the ticket salesman said “have fun even if it is a remake,” rude bitch. The film started and I was immediately tense, about 30 minutes in I was standing in the hallway leaving the theater every 30 seconds because I could not handle. I went back the next day and saw it again, and actually ended up seeing it 5 times in theaters.

The film is often regarded to as the “best” remake of the 2000’s and was a huge box office success, grossing over 100 million world wide. If you still haven’t seen this movie, today is the day to do so! So everyone grab some popcorn,  lock the doors and enjoy the movie!

One comment on “Happy 10th Anniversary “The Texas Chainsaw Massacre””