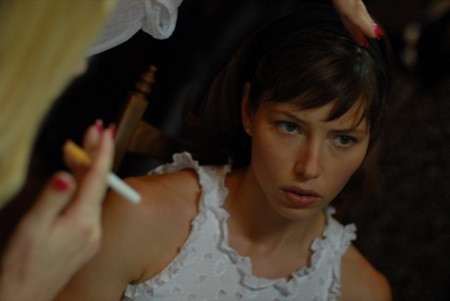 Any long term Jesse fan knows the stress and annoyance that comes with the never ending ‘Nailed’ project. Nnytime anyone from the cast has a promotional tour the  question comes up — “What happened with Nailed?” This time we got a pretty cool answer from Academy Award winner and Director David O’Russell when he talked to Collider in early February.

RUSSELL:  That was like, “How can it get much lower than getting divorced, having to put your kid in a special boarding school at a young age, and being broke and not knowing how to make a movie?”  Well, it can get worse.  You can make a movie that doesn’t get completed because of mysterious financing.  So, I wrote a film with Kristin Gore, Al Gore’s daughter, who’s a terrific writer and a terrific person.  It was based on a book she’d written, and it was a satire about health care.  It was about a woman who had a nail gun go off into her head, by accident.  Jessica Biel was terrific in the picture, with Jake Gyllenhaal and Catherine Keener, and Tracy Morgan was hysterical in it.  And then, it didn’t get finished.  It got shut down nine times, which is an existential Kafka-esque experience, in itself.  It also happened to Taylor Hackford.  They made a movie with Taylor Hackford, as well.  And I really shouldn’t talk about it much more than that, for legal reasons, but it was really weird except that I got to know and love those actors, and I got to love the state of South Carolina, which is where we were.

Ugh, David, you’re ruining my life. Someone release ‘Nailed’ already or David should just cast Jessica in a new movie, that’d be cool too.