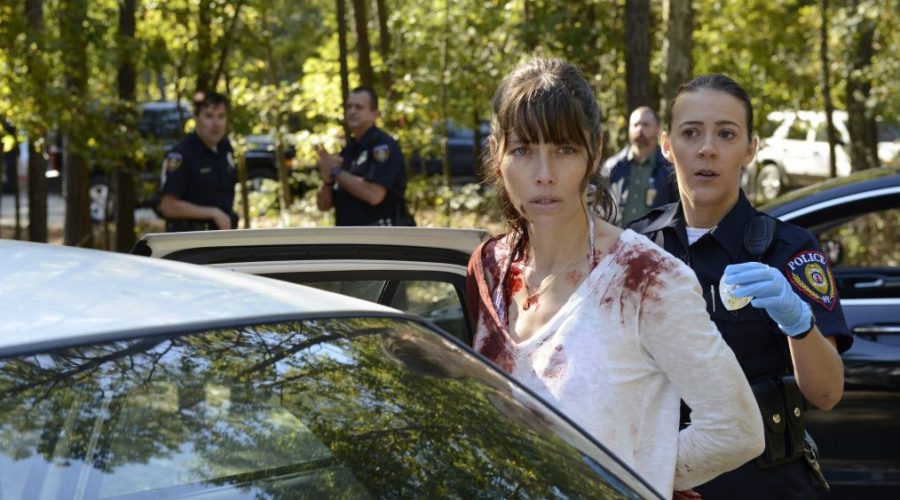 Jessica Biel holds nothing back in her performance as Cora, who switches between cooperative, cathartic, and violent from scene to scene.

In recent years, USA has emerged as one of the best places to find compelling original dramas on cable television. The network has had some ambitious new projects in the works for a while, one of which has been the murder mystery series called The Sinner. Now, a good murder mystery is hard to pull off on television. Fortunately, The Sinner has all the makings of a series that will leave viewers puzzling, speculating, and wanting more after every episode.

The mystery of The Sinner revolves around Cora Tannetti (Jessica Biel), who at first seems remarkably unremarkable. She works with her husband Mason (Christopher Abbott) at his family company, wants a little breathing room from her in-laws, loves her toddler son, and wants to get to the beach early to stake out a good spot. Aside from a need to self-medicate before getting intimate with her husband, Cora seems perfectly normal… until everything goes wrong. The family trip to the beach and dip in a lake turns disastrous when Cora snaps and murders a man she doesn’t even seem to know by stabbing him to death.

If it seems like I’ve just spoiled you on the entire plot of the series, don’t worry. The Sinner isn’t a whoddunit mystery. We know exactly who killed Frankie Belmont (Eric Todd) and how she killed Frankie Belmont and where she killed Frankie Belmont. What we don’t know is why Cora suddenly seized the knife she was using to cut fruit for her son and went to town on a guy at the beach. That’s where Detective Harry Ambrose (Bill Pullman) comes in. Convinced that there’s more to the story than that Cora simply snapped out of nowhere, he begins to dig into her past, and he works to uncover secrets about Cora’s family that might help make sense of the vicious crime of which Cora is quite undeniably guilty.